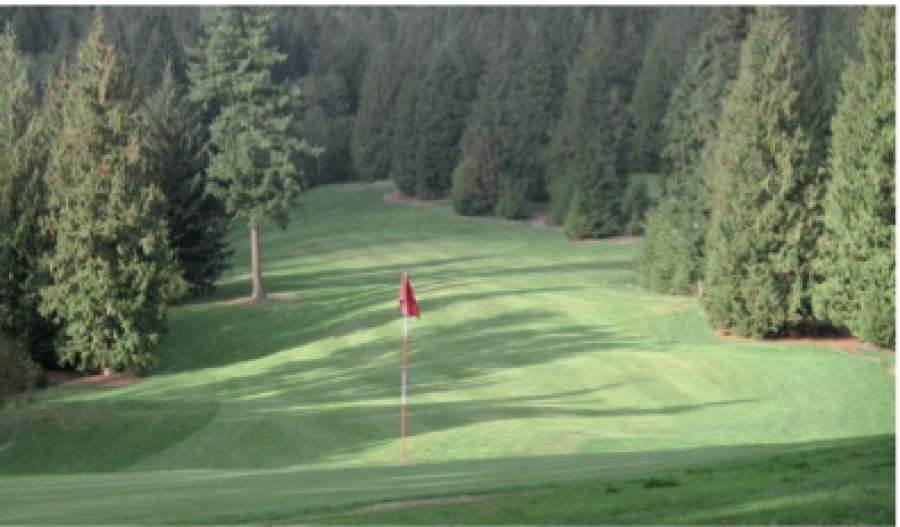 Eighteen Pastures might be the toughest golf course you’ll ever play. Cut out of the forests on the south slope of Iron Mountain (Eighteen Pastures former name), the original members set out to create the toughest golf course in Canada. Many people believe they may have succeeded. Nonetheless, Eighteen Pastures is played and enjoyed by golfers of all skill levels. The once lightning quick and treacherous greens are now maintained to a manageable speed. A fourth set of tees has been added and the constant clearing of underbrush has tamed the once feared beast.
Eighteen Pastures has some of the greatest golf holes in the area. The 563 yard, par 5, #6th hole requires a well placed drive. A long iron will leave you with about 100 yards to the green while the fairway drops several meters below you. The two tiered green on hole #16 is surrounded by enormous Douglas fir trees. Many of the holes have stunning views of the Fraser Valley and Mount Baker.
The clubhouse, an appropriately designed red barn, has an assortment of delicious foods to enjoy before or after your round. It is also a great place for banquets, weddings or other functions. Eighteen Pastures looks forward to seeing you but be prepared to shoot 10 – 15 strokes higher than you usually do. You can then say, “I’ve been Pasturized!”